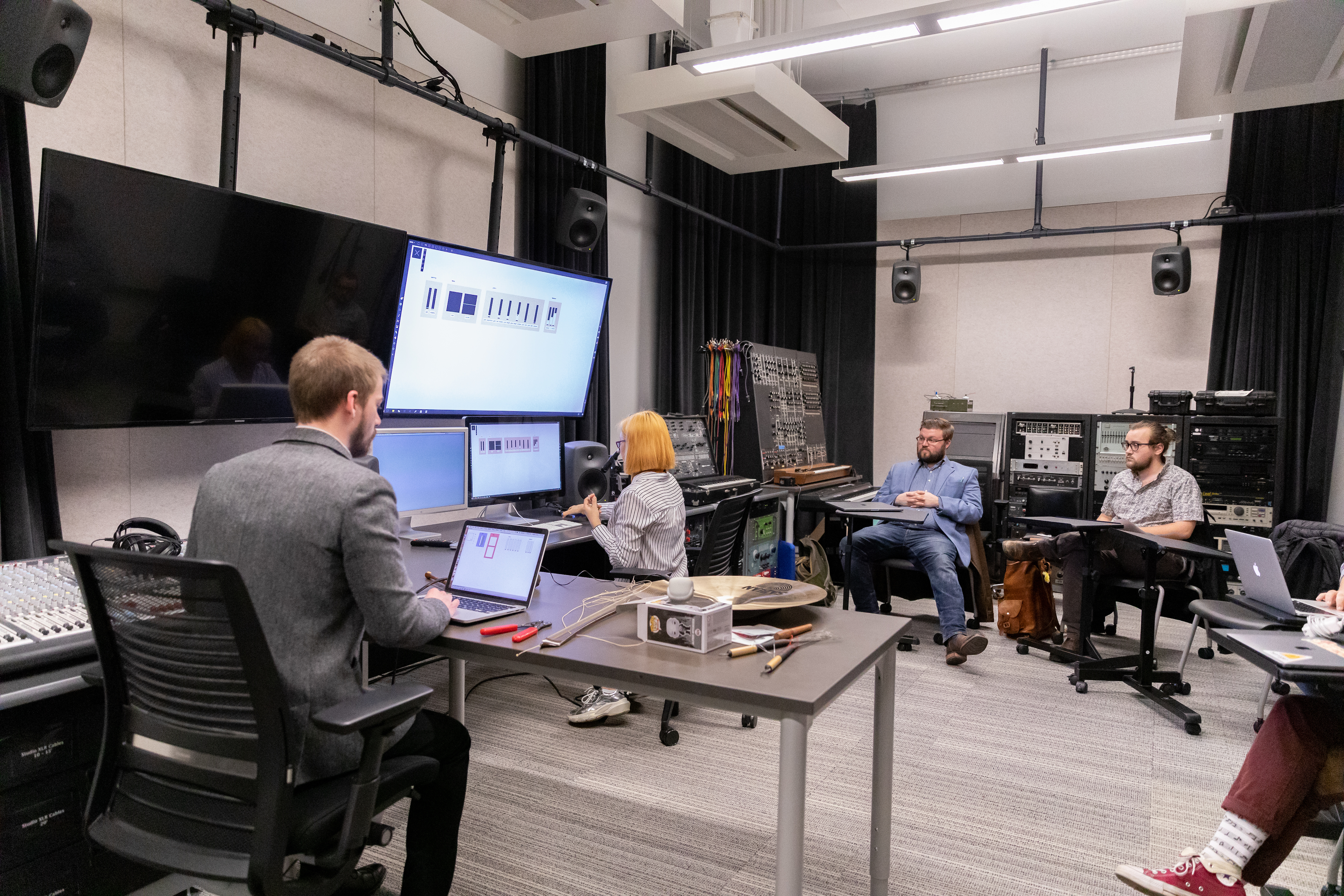 Welcome to the University of Iowa Electronic Music Studios.

The University of Iowa Electronic Music Studios were founded in 1964, when renowned physicist James Van Allen supervised a thesis project by James Cessna to build the world’s first digital synthesizer. Professor Robert Shallenberg was hired to direct the Studios— with Cessna as Research assistant— and to work with Cessna on the synthesizer. Their instrument was later replaced by a large Moog III synthesizer, which remains in operation to this day.

In 1969, Shallenberg left for Indiana University (where he would go on to establish another electronic music studio with Iannis Xenakis), and passed the position of director to Peter Tod Lewis. The Studios were originally established in a quonset hut, but in 1970 they were moved to their new location in the (former) Voxman Music Building. In 1972 a Rockefeller Foundation grant gave Lewis the resources needed to outfit the Studios with sophisticated analog synthesis, processing, and recording technology of the day. These new technologies enabled students to produce works for tape and live electronics, film, lights, and lasers, and these works began to receive international recognition— attracting guest composers like Vladimir Ussachevsky, David Tudor, and Luciano Berio. Fascinated by the Studios, Berio returned to IRCAM and gave a presentation on the new developments in audio synthesis technology at Iowa.

The wide-ranging interests of multi-award winning composer Kenneth Gaburo, appointed director in 1983, stimulated a new period of growth and experimentation for the Studios— introducing new technology for speech, text, and image manipulation. This multimedia emphasis continued into the early 1990s, as Visiting Directors Robert Paredes and Elizabeth Hinkle-Turner oversaw the installation of computer and video systems.

Lawrence Fritts was appointed director in 1994, overseeing a major upgrade to realtime DSP systems. In 1996, he initiated the Iowa Musical Instrument Samples Project, a collection of note-for-note samples of musical instruments recorded in an anechoic chamber. In 2000, he organized a series of International Exchange Concerts with institutions in France and Italy; and in 2002 he hosted the 2002 National Conference of the Society for Electro-Acoustic Music in the United States (SEAMUS).

Since 2018, Sivan Cohen Elias has been the director of the Electronic Music Studios at Iowa— bringing new digital hardware and software to the Studios including new midi controllers, IRCAM’s Studio Forum software suite (including AudioSculpt), Ableton Live with Max for Live, the advanced Izotope Suite, and deeper involvement with Max’s Jitter for the creation of multi-media audiovisual works. Her focus has been on the use of technology for the expansion of the imagination in both listening to as well as creating works involving sounds, visuals, and movement interacting with live electronics.